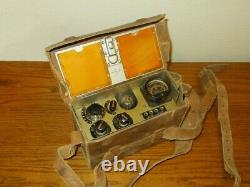 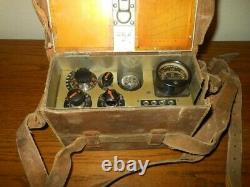 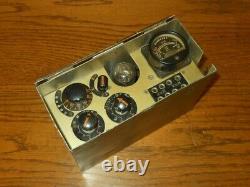 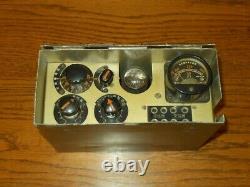 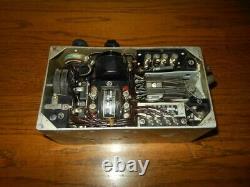 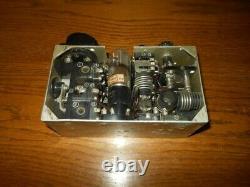 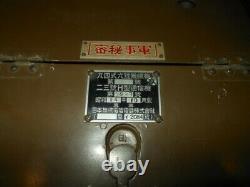 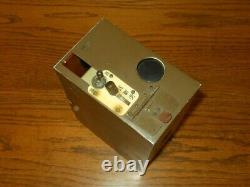 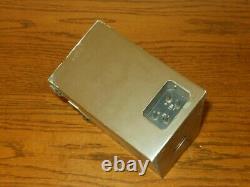 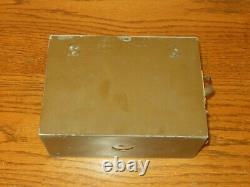 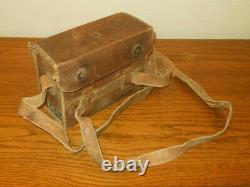 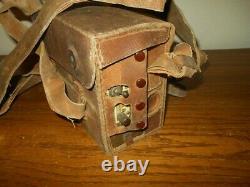 This item was brought back by a US Serviceman. The Type 94-6 (94 Mark 6) was a miniature single-valve portable transceiver that was used by the Japanese Army during WWII, as part of a series of Army radios. Being the smallest version, the radio was intended for the infantry, but was also used for various'special' purposes. It is extremely small for the time period, and is suitable for voice and morse transmissions in the VHF band (25-45.5MHz), divided over three frequency ranges.

It was intended for tactical i. Short-range communication, up to 2km. Development of the radio began in 1934 and the first units were delivered in 1935. Initially the radio was only suitable for a single band, but a few years later (around 1937) the range was extended and a three-position band selector was added. According to the name plate, the radio shown here was manufactured in February 1943.

Japanese radios like the 94-6 are very rare. In WWII, during the heavy fights at Guadalcanal, American Marines captured a number of them and immediately put them to use for their own communication [1].

Apparently the radios worked well, but were only suitable for short-range communication. Immediately after WWII, the US ordered the destruction of all German and Japanese war-time equipment, which is why so few of these beautiful radios have survived. Made of steel, aluminum, and leather, this transceiver is in EXCELLENT used condition!

Features some wear and marks due to the age, but nothing that detracts. 100% complete internally, it also features both data plates, including a prominent warning label indicating, "Army Top Secret".

It comes complete in the original rubberized canvas case, but like most Japanese cases of the era, it is a bit stiff. The carrying strap is also included.

Missing the two snaps to close the main cover, but it is a common snap, so modern replacments can be found. A VERY RARE item not normally seen on the market, it would make a PERFECT addition to any collection or display! Most of my items are vintage, and as such are AS-IS, so you must therefore expect a degree of wear due to age and/or usage. Although my passion is the Me109, I do offer many other German Aircraft Fw190, Me262, etc.

, as well as USAF and Japanese items. Occasionally I do offer many non-vintage items such as prints and art relating to the time period. Use is solely based on my authorization only. Powered by SixBit's eCommerce Solution. This item is in the category "Collectibles\Militaria\WW II (1939-45)\Original Period Items\Japan\Other Japanese WWII Orig Items".

The seller is "messerschmitt_109" and is located in this country: US. This item can be shipped worldwide.