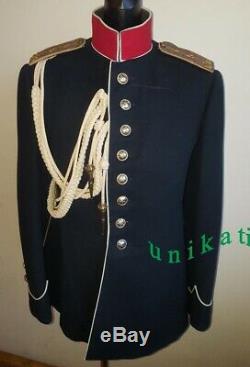 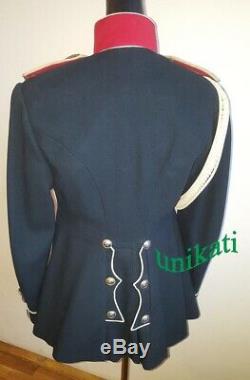 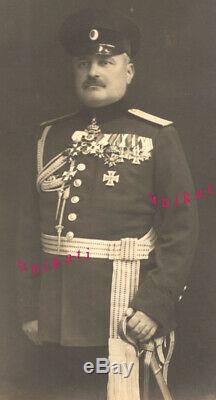 A uniform set equipment for collection, museum , or reenacting!! The Bulgarian royal uniforms are very interesting and valuable because at the end of the 19th century they are under the influence of the Russian Empire. During the two world wars, the army was an ally of Germany and Austria, so the uniforms also had German and AustroHungarian influence.

It is very rare to find a ceremonial tunic belonging to an officer from the regiment of King Boris III Cavalry. The dark blue model joined the army in 1927, worn in the 1930s. The uniform has a white stripe and a high red collar, characteristic only of the Royal Cavalery. The metal buttons are also white / silver, bearing the symbol of the royal army. There is one inside pocket and two hidden on the back, behind the buttons. Size of the tunic - M.

The tunic is with the shoulder straps of a senior officer, a Colonel of the 5th Cavalry Regiment. A ceremonial aiguillette / aglet. For a high-ranking officer, commander of a regiment.

Aglet are white in color. The metal tip is shaped like a royal crown, and the ornaments on the top are also typical of royal signs. The uniform belonged to an officer from the Royal Cavalry who was not a large regiment. Later in 1936 the model was changed, so this example is a truly precious find. He also survived the persecution of such royal objects by the communist regime.

He set is 100% original , in rare perfect authentic condition, See photos for details! Personally elected over 30 years ago for a private collection, a rare and beautiful find of.

About 100 years of history. Very rare set for serious military collectors and museums.

See my other proposals from my private collection!!!!!! The item "Very Rare Original Parade tunic uniform of Royal cavalry officer Bulgaria M1927" is in sale since Sunday, August 11, 2019. This item is in the category "Collectibles\Militaria\WW I (1914-18)\Original Period Items\Other WWI Original Items".

The seller is "unikati" and is located in Sofia, default. This item can be shipped worldwide.