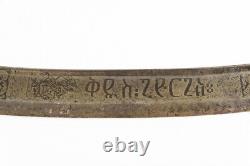 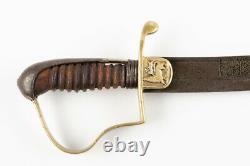 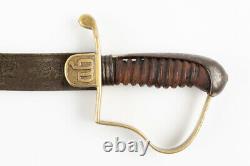 Ethiopian/Abyssinian sabre with German blade. Lion of Judah, the Ethiopian royal family crest, on the langet.

German blade made by A. Holler, marked with thermometer and G. The curved blade is extensively detailed with floral motifs, military arms, and Ethiopian script.

Naming tradition the Hebrew name and the substitute name are often combined as a pair, as in this case. The Lion of Judah was used as a Jewish symbol for many years, and as Jerusalem. Was the capital of the Kingdom of Judah.

In 1950 it was included in the Emblem of Jerusalem. It was depicted on a map of the Upper Nile published in 1683 by the Italian Jobi Ludolfi describing the Lion of Judah symbol as the Royal Insignia of the Ethiopian empire. The Solomonic dynasty of Ethiopia claims to have its patrilineal origin in the Israelite Royal House of Judah.

The Lion of Judah served as the hereditary title of the Solomonic Ethiopian emperors. And was depicted on the flag of Ethiopia. Due to its association with Haile Selassie, it continues to be an important symbol among members of the Rastafari movement. The item "Very rare Ethiopian/Abyssinian Royal The Lion of Judah''sabre with German blade" is in sale since Sunday, March 21, 2021. This item is in the category "Collectibles\Militaria\1784-1860\Original Period Items".