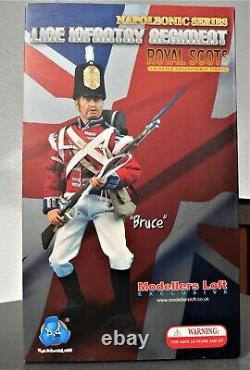 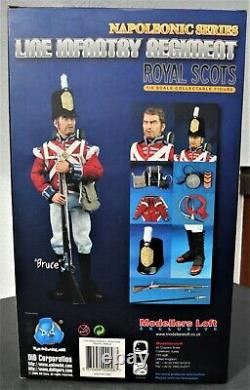 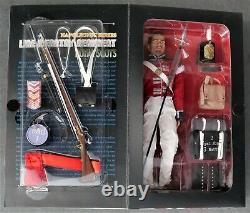 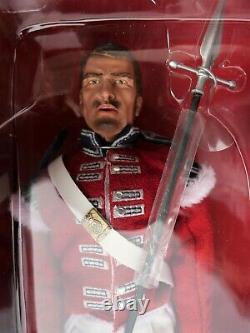 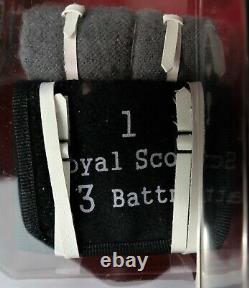 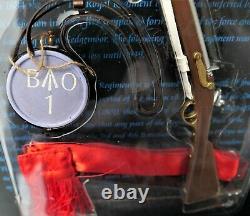 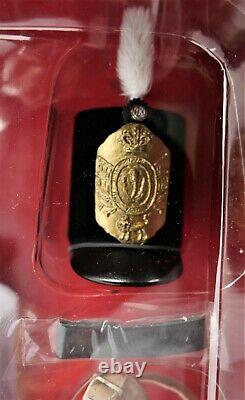 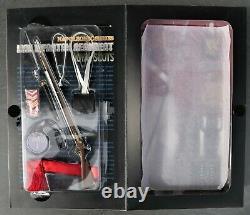 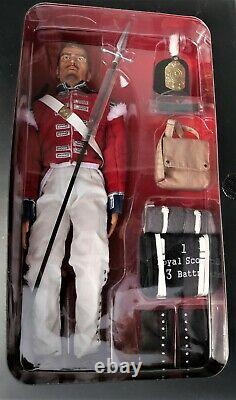 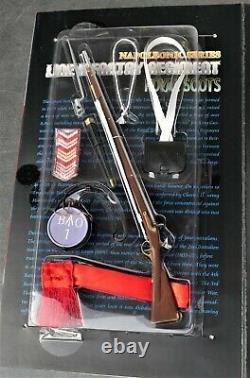 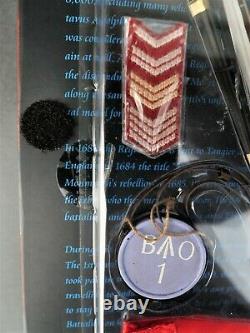 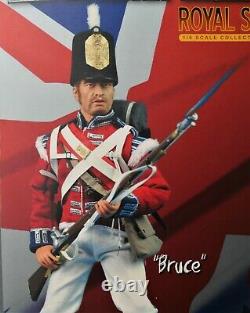 Here is another very rare item from my Napoleonic Action Figure collection a British infantryman named Bruce from the 1. (Royal Scots) Regiment, the oldest regiment in the British Army (but due to post-cold War downsizing and amalgamations, the regiment no longer exists under this name but is part of the Royal Regiment of Scotland). This figure is brand-new in its original box, whose interior has never been opened.

The Bruce figure is very flexible he can represent a sergeant-major, sergeant, corporal or private because a choice of sleeve chevrons is included; also a choice of weapons a musket with bayonet if he is to represent a private or corporal and a spontoon if he is to represent a sergeant. A red sash is also included if you want to make him a sergeant or sergeant-major. As with all the Napoleonic Action Figures made by the Dragon in Dreams company fifteen years ago in a very limited edition, the amount of detail in the uniform and equipment is incredible.

Just look at the trim on his uniform coat especially the shoulders! Bruces stovepipe shako and its plate are the type used prior to the introduction of the Belgic Shako in 1812, and his weapons correspond to this era of the Napoleonic Wars (and the War of 1812) because his India Pattern Brown Bess musket is the pre-1809 version with a swan-necked cock (which of course stayed in service for a number of years after 1809). You will also love the accuracy and detail of his other items of equipment: the backpack and canteen with correct Royal Scots markings, the cartridge box, food bag, cross belts and buckle, bayonet and scabbard, gaiters, and shoes. Ideally you should have two Bruce figures in your Napoleonic collection/display, one dressed and equipped as a sergeant and one as a private; just get an alternate head for one of them. Even used Bruce figures without the original packaging command high prices, but with my Bruce you are getting a brand-new figure, 100% complete, with everything untouched, because the interior of the box is still factory sealed (just look at the seals in my photos; you will see that they have never been broken).

This item is in the category "Toys & Games\Action Figures\Historical Figures". The seller is "historian1815" and is located in Emmendingen. This item can be shipped to all countries in continental Asia, United States, European Union member countries, Canada, Australia.