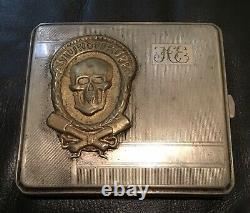 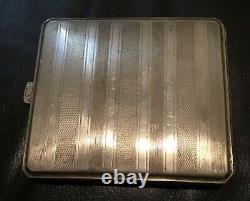 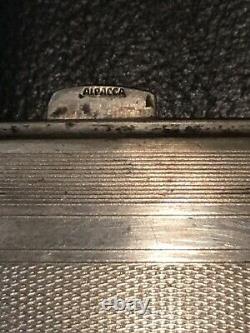 Imperial German, Great War, Very Rare Storm Trooper Cigarette Case, which based on the quality of this product it was probably the property of an officer or senior non-com. The case was made by Alpacca who was the premier maker of Cigarette Cases. In the spring of 1915 Hauptmann (later Major) Willy Rohr refined the infiltration tactics that were called Storm Troops (Stosstruppen).

These soldiers were reinforced with machine gun and flamethrower platoons using fire to facilitate movement. They were the first soldiers issued steel helmets (stahlheim) which were later issued to all Imperial Soldiers.

A year later, In the April of 1916, the assault detachment was named Assault Battalion Rohr and expanded from 2 to 4 Pioneer Companies. Several Jager Battalions began training as new assault battalions.

These soldiers were in very small numbers in the Imperial Army. In over 40 years of collecting this is only the third time I have found one of these. 2014 marked the 100th anniversary of the start of the Great War. See my other listings for more Great War items.

The item "Imperial German, WW1, Storm Trooper, Very Rare Cigarette Case, Officer Quality" is in sale since Friday, September 25, 2020. This item is in the category "Collectibles\Militaria\WW I (1914-18)\Original Period Items\Germany\Personal, Field Gear". The seller is "sanderssmg7" and is located in Colorado Springs, Colorado.

This item can be shipped to United States.