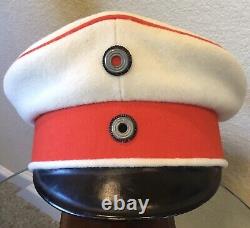 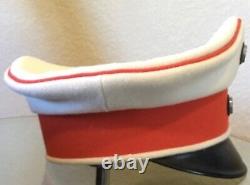 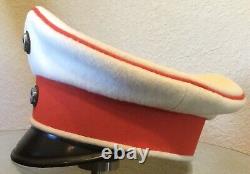 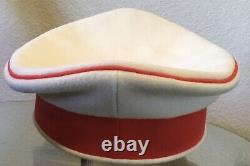 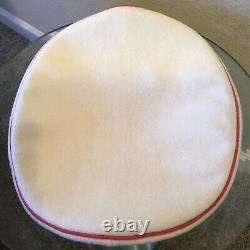 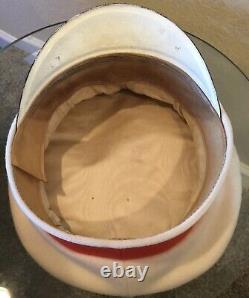 Imperial German, Great War, VERY RARE, MINT, Garde Du Corps Officer's Visor Cap. This cap is from the most fabled regiment in the German Army. The Officer's that served in it were all members of the German Nobility or Royalty.

All of the elite Prussian Garde Regiments were stationed in Potsdam rather than Berlin. The Cap is made of fine White doe skin wool which is a very light weave wool far different from the wool normally seen on visor caps.

The caps body is white with a bright red band that measures 1.75 in width. One very thin bright red piping band encircles the top of the cap. The interior of this cap is remarkable compared to other Officer's visor caps. The cap has a light brown sweat band with a liner of fine white silk which is a sure sign of belonging to a noble family.

This is only the second Garde Du Corps I've acquired in over 40 years of collecting Militaria. Germany was a federation of twenty-seven kingdoms, duchies, principalities and "free and imperial cities". By far the largest of these components was Prussia, whose King also bore the title of German emperor.

This Cap is absolutely mint with no moth tracks and some light soiling which is to be expected in a cap over 100 years old. This cap is impossible to upgrade. Check out my other listings for an assortment of Imperial German and Great War (WW1) historical items. This item is in the category "Collectibles\Militaria\WW I (1914-18)\Original Period Items\Germany\Personal, Field Gear". The seller is "sanderssmg7" and is located in this country: US.