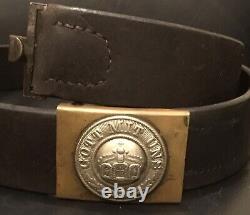 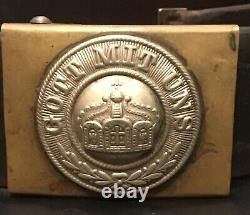 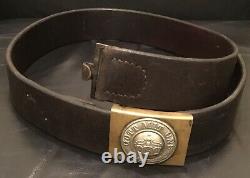 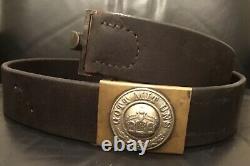 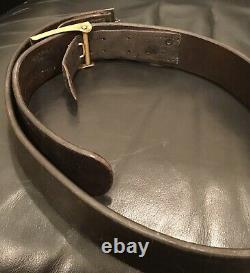 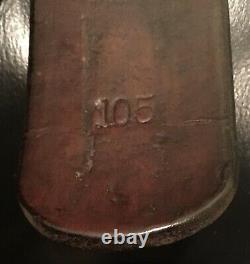 Imperial Germany, Great War, Very Rare, Marine Infantry or SeeBatallone Enlisted Man Brass Buckle and Belt. This Belt & Buckle was most likely part of the two divisions that formed Marine-Korps-Flanders (Naval Corps Flanders) under Admiral Ludwig Schroeder (known as The Lion of Flanders). In early 1917 a third Marine Division was organized giving the Naval Infantry Corps a strength of 70,000 men. This was an extremely small part of the millions of men serving in the German Infantry during the war. The Belt is marked 105 and measures 41 long.

It has been field modified (see photos) down to accommodate a waist from 34 to 29 as food was scarce as the war dragged on. The Brass Buckle shows some ware.

The inner perforated strap where the buckle is attached to the belt is extremely brittle and needs an oil treatment. Imperial Marine Units in 1914 fought in Tsingtao, Antwerp and Africa. In1915 at Ypres & Africa, in 1916 on the Somme & Africa, in 1917 in Flanders & Africa and during the 1918 offensive in Northern France & Africa.

At the end of the war the African forces were undefeated. See my other listings for an assortment of Great War items. The item "Imperial German, WW 1, Very Rare, Marine Infantry EM Belt & Brass Buckle" is in sale since Tuesday, November 24, 2020. This item is in the category "Collectibles\Militaria\WW I (1914-18)\Original Period Items\Germany\Uniforms". The seller is "sanderssmg7" and is located in Colorado Springs, Colorado. This item can be shipped worldwide.