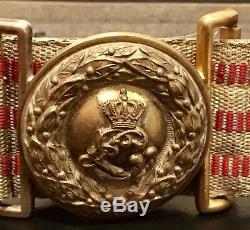 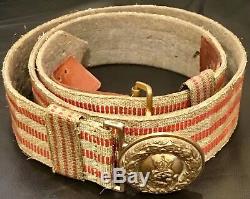 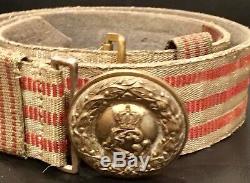 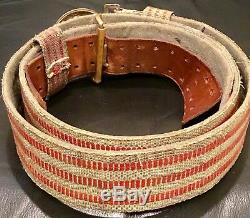 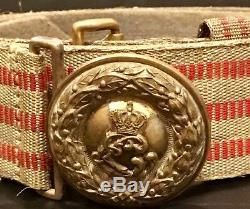 Imperial German, VERY RARE, WW 1 Officers Brocade Dress Belt & Buckle from the Grand Duchy of Hesse and By Rhine. There is a slight issue on the interior of the belt (see photos) the felt liner shows some wear and the Brocade is soiled.

Brocade Belts are quite rare as they were only worn on ceremonial occasions. The German Empire was composed of four Kingdoms, Prussia, Bavaria, Wurttemberg & Saxony along with Grand Duchys, Duchies, Principalities & Free and Imperial Cities. This belt is a pre-war example from the Grand Duchy of Hesse and By Rhine. The last Grand Duke, Ernst Ludwig, was A grandson of Britains Queen Victoria and the Brother of Empress Alexandra of Russia. In my many Years of Collecting this is only the second Officers belt and buckle from this Grand Duchy that I have been able to offer.

See my other listings for an assortment of Great War items. International is no problem, just needs to be quoted separately. The item "Imperial German, WW 1, VERY RARE Hessian Officers Brocade Dress Belt & Buckle" is in sale since Friday, April 5, 2019.

This item is in the category "Collectibles\Militaria\WW I (1914-18)\Original Period Items\Germany\Uniforms". The seller is "sanderssmg7" and is located in Colorado Springs, Colorado. This item can be shipped worldwide.