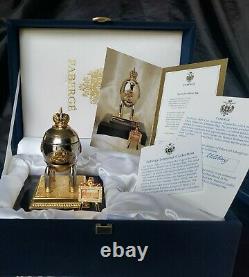 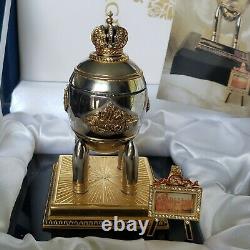 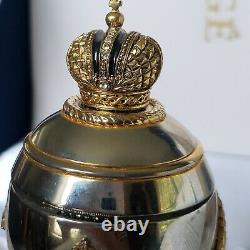 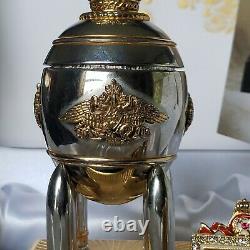 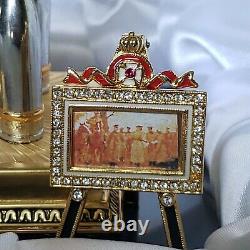 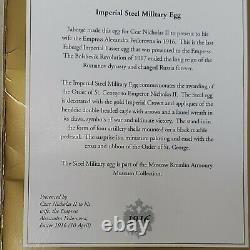 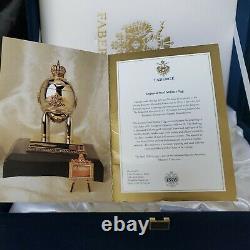 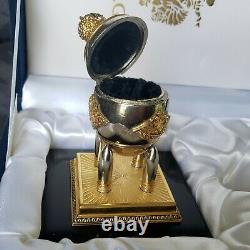 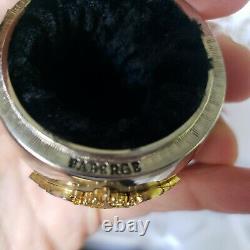 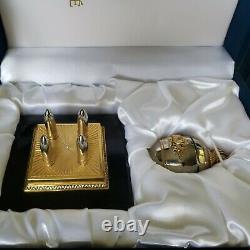 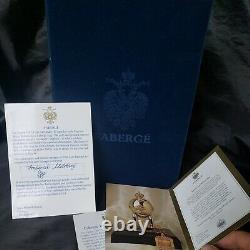 It was an April 1916 and this was the last Egg presented to the Empress Alexandra Fedorovna. Russia was at war and Nicholas was at the front... He telegraphed Fabergé to make the Egg and deliver it to the Empress on the eve of Easter. Because the country was at war Fabergé elected to use rather austere materials in the making of the Egg and, of course, the Egg itself reflects the period of time in which it was made. The Egg is made of steel, quite a departure from the usual lavish materials used. Topping it displays, the Imperial Crown; on the front face, the heraldic shield of the Romanovs, the double headed eagle with arrows and a laurel wreath in it's claws. On the other three faces of the Egg there is the coat of arms of the city of Moscow, a figure of Saint George and the monogram, of the Empress, A and an O with a line across it. The O is a cyrillic figure. The year, 1916, is also displayed. The Egg stands on four artillery shells mounted on a nephrite pedestal. Inside the Egg is rather remarkable surprise: a steel easel in the shape of an A with the Imperial Crown and the Cross and Ribbon of The Order of Saint George. Standing on the easel is a miniature painting of the Tsar and Tsarevich in conversation with the General Staff at the front.

It was painted for this purpose by Zuiev. Our Egg is identical to what I have just described. S igned by Tatiana Faberge. Faberge Imperial Steel Military Easter Egg. Authentic FABERGE Imperial STEEL MILITARY EGG In ORIG Box.

LAST EGG IN FABERGE EASTER EGG SERIES BEAUTIFUL RARE PIECE OF ART COMES WITH ORIGINAL BOX AND PAPERWORK IT SHOWS SOME LITTLE WEAR , FOR SOME REASON IT DOESN'T CLOSE TIGHTLY, OVERALL REALLY BEAUTIFUL PIECE IT IS 6" HIGH from base to the top of the crown and 4,5" ACROSS base, egg is 3,5" 2" ACROSS HEAVY EGG ON MARBLE BASE COMES WITH MINIATURE STAND AND ART WAR PICTURE MADE BY FABERGE WORKMASTERS JEAN-MARIE REYNAUD THE IMPERIAL FABERGE STEEL MILITARY EGG The Egg is made of steel, quite a departure from the usual lavish materials used. Comes with box and certificate in pictures. Pictures are of actual item.